Antoni Gaudi: No way to be indifferent 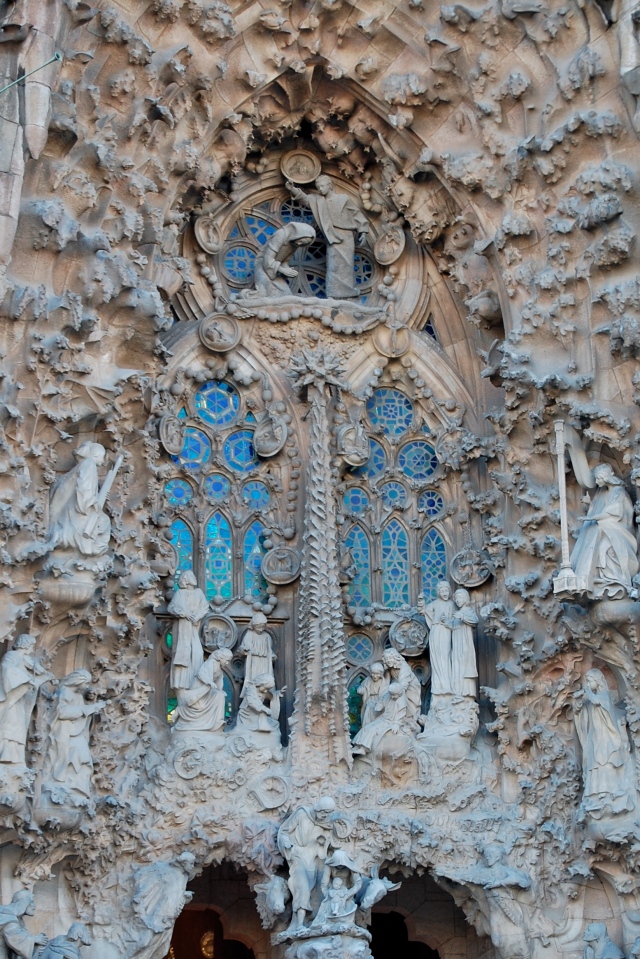 A big reason for going to Barcelona is to see the Antoni Gaudi architecture.   Gaudi was an architect during the late 1800s and early 20th century who made his mark with his own brand of Art Nouveau style.

Like Frank Lloyd Wright, he not only designed the buildings, but also dictated the style of furniture to be used, creating a total environment for his clients. Some might say obsessive.  Certainly driven.

My friend Peggy says, “There is something so truly Spanish about him.  I remember seeing a performance in Barcelona by Flamenco Dancers and making the connection because there was something so curvilinar, swirling, ruffly, dynamic and dramatic (to say nothing of colorful) about the kind of dancing and the frenetic rhythms that characterize it.  There is ‘something’ about Gaudi’s architecture that captures this cultural energy in some weird way.”

Now, lets be clear, I didn’t really expect to like the stuff.  My preference is for clean straight lines, simple textures and patterns and an emphasis on one or two focal points. I have gotten away from ornamentation and my goal is to live in uncluttered spaces.   Mies van der Rohe is more my style.

But, to my surprise I fell in love with Gaudi.  No, I don’t want to live with it, but I am truly fascinated.  Why?  Several reasons.

1.    The man was incredibly creative. He took a prevailing direction in design and architecture to a whole new level.

2.    He was a brilliant engineer, designing buildings with arches and light shafts, bringing in natural light  and  using unconventional construction methods.

3.    While too fussy for me, I loved his inspiration of nature.  He was incredibly consistent in his approach. I admire the vision. 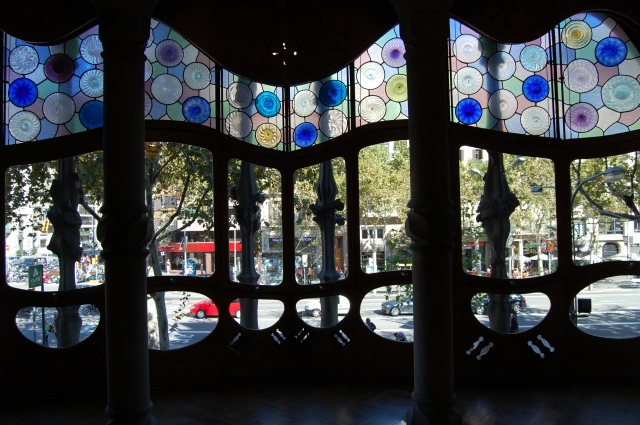 One can visit a number of Gaudi projects in Barcelona. These are the ones on our shortlist.

First, Casa Batllo. This is a large home on Passig de Garcia, interesting to view during the day and fabulous at night all lit up.  It is Weird. It is Wild. Grotesque.  Yes, true.  But I found the doorways and windows to be works of art.  The interior light shaft with graduated blue tiles stunning.  And the view from the roof is not to be missed. 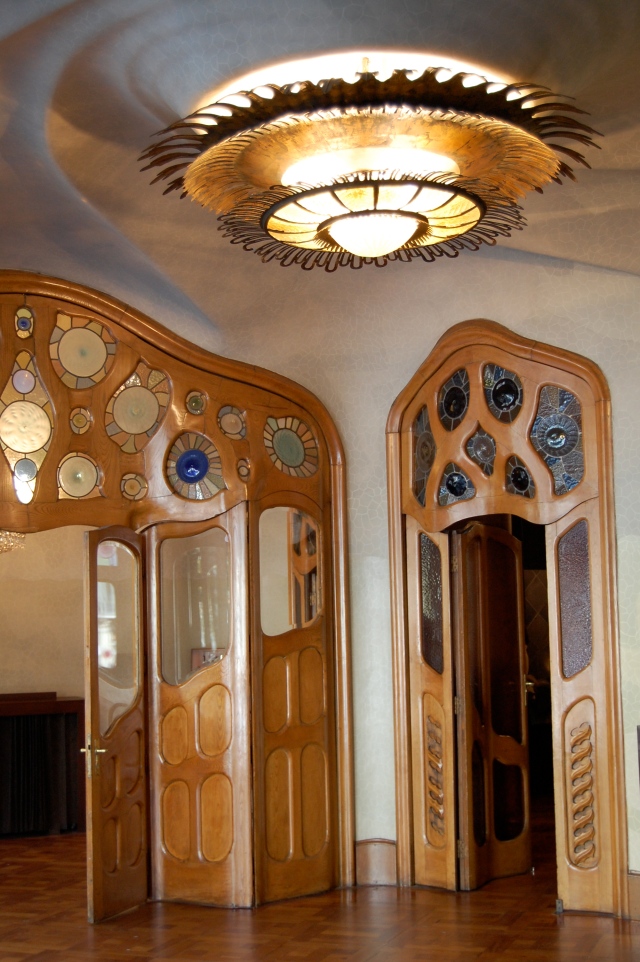 La Pedrera. An apartment building also on Passig de Garcia. Here one could tour the main pubic spaces. Meander the roof to see the sculptures that I’m sure are inspirations for Darth Vader. People live in the building so much of the it is off limits, but the tour does include one apartment.

Parc Guell is high on my list of places to visit. (Ha Ha, pun intended).  Looking over the city this public park features two small buildings, a pavilion and whole series of benches with a fantasy feel that can’t help but appeal. Interestingly, it was originally planned to be a housing development, but the Spanish Civil War intervened, no one bought lots and eventually the developer turned it into a city park.   It’s a delightful, colorful and lovely place to hang out. 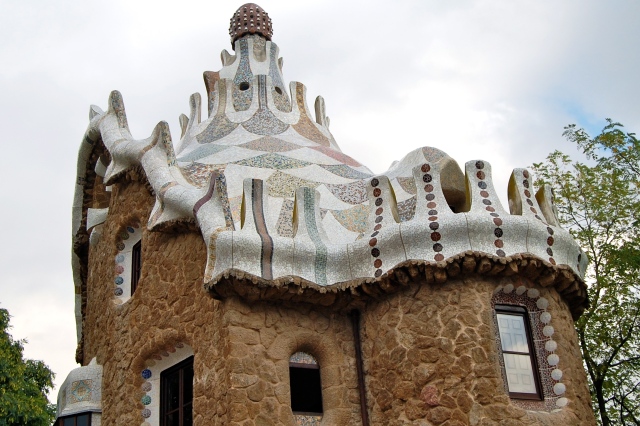 We almost didn’t go there.  And what a big booboo that would have been.  On our first   day in Barcelona we did bike tour where we rode around this enormous cathedral, still being worked on, and wondered if we should go back and see the inside.  After all, we had just visited Cathedrals in Florence and Siena and over the years of traveling have seen a lot of big medieval and renaissance churches. Did we really need to go to another?

I’m so glad we changed our minds.  My, my, this one is nothing like those structures.  Gaudi has taken the idea of a cathedral and turned into something totally unique.  It is still being completed, so we saw a lot of construction machinery and workers, but we sure could get the idea.  Instead of flying buttresses typical in most cathedrals (think Notre Dame in Paris), Gaudi designed massive columns to hold the weight, using trees as inspiration, packing an aesthetic punch you have to see to believe. 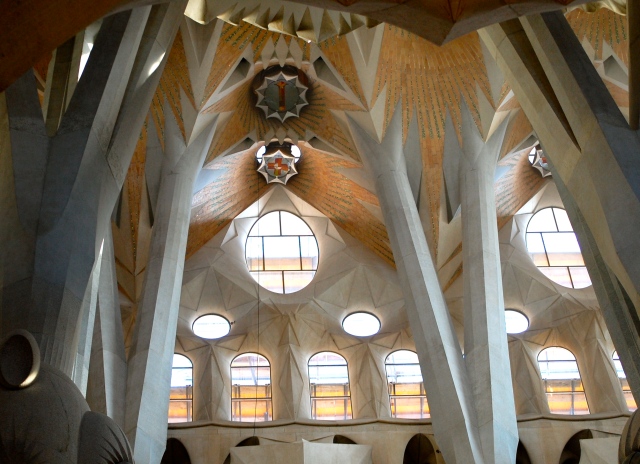 The windows made me think of Picasso. They contrast with the clear glass windows that allow natural light to flood the vast space.  Its spiritual in an eerie way.   I will need to go back when more is completed and I can experience it without the construction crews.

It is huge. Will be able to hold 10,000 for Sunday service. The choir will be more than 1000 singers.  Already a major tourist destination, this cathedral will be a huge draw from all over the world.  No wonder Barcelona has just built a major new airport designed to hold 30 million visitors a year.  They’re probably going to get them.

9 Responses to Antoni Gaudi: No way to be indifferent