It was over two years ago that I visited Angkor Wat in Cambodia, but the images and the mystery of the ancient Khmer capital still haunt me. I can vividly picture the dramatic rock temples, the massive and tangled over grown jungle and the extensive grounds of this vast temple complex.

Angkor Wat, the name of the largest of the temples, is  used frequently to describe the lost civilization that flourished in Cambodia from the 800s to 1400s, peaking with more than a million residents somewhere around 1200. 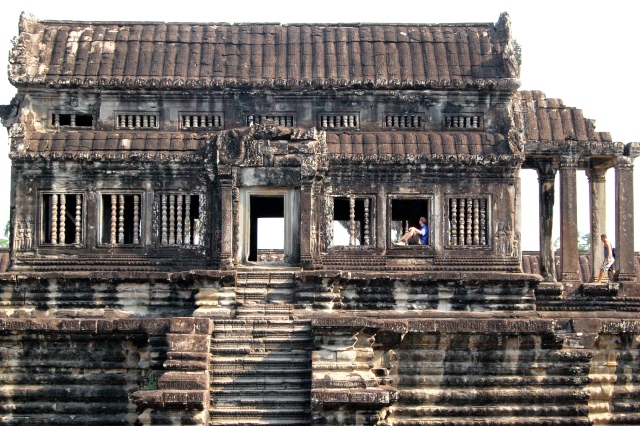 No one really knows for sure what caused this powerful and cultivated community to disappear.  But it did–lost for 400 years while  the jungle smothered the buildings and temples and homes.  The ones built with wood or bamboo disintegrated, consumed by Mother Nature. The remains of about 100 stone temples and structures can be toured and enjoyed.

More than 22 kings over a period of 500 years presided over this glorious city, building temples to honor themselves, their families and teachers. Interestingly, their homes were not constructed of stone so they did not survive.

Generous amounts of history remain.  Stories and characters of Hindu mythology and the wars of the area are depicted on bas-relief carvings.

My son and I   spent parts of three days touring the ancient constructions, discovered in the late 1800s by a French naturalist.   Like many tourists, my son loved scrambling up and down the various structures, exploring as much as possible while I thoroughly enjoyed hearing the stories shared by our guide. 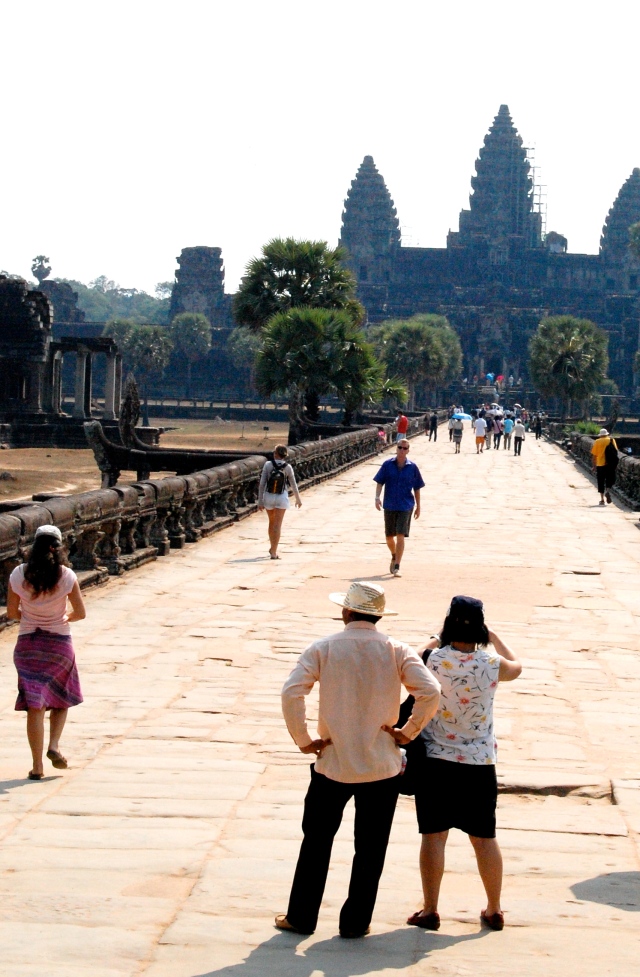 Now a major tourist site, the small town of Siem Reap nearby enjoys visitors from all over the world flocking there.  The locals are entranced with idea that Angelina Jolie  made a movie in their town and in the temples. The local people repeatedly told us about her visit and what foods she liked in the different restaurants. Her time there was clearly a “big deal.”  There are even special dishes named for her.

While I find the obsessing with Miss Jolie somewhat amusing, my most vivid memories  are of Ta Prohm, a temple where we could see vividly  the power of  giant jungle trees that took over and  destroyed much of the temple.  Resembling octopus legs, the roots of the giant banyan trees strangled the buildings.

I particularly liked visiting the grounds early in the morning, when our guide took us to a less occupied entrance so we could enjoy the erie setting by ourselves. It was also a lot cooler  then.  Even in March I found Cambodia to be uncomfortably hot.

The other really fun thing– Angkor Wat is a regular destination for wedding photos. We enjoyed watching several groups pose and preen before the stunning ancient scenes. The broken down ruins are quite the contrast to the young couples in their colorful native costumes,  celebrating their plans to spend  their lives together. 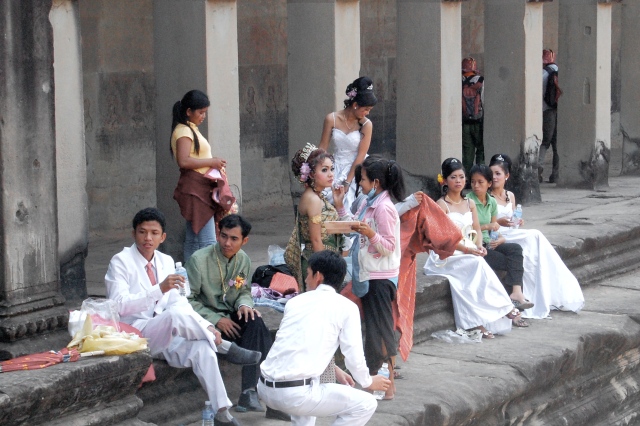 8 Responses to Ångkor Wat in Cambodia haunts me still.